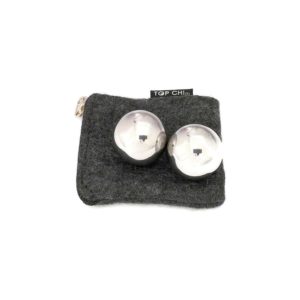 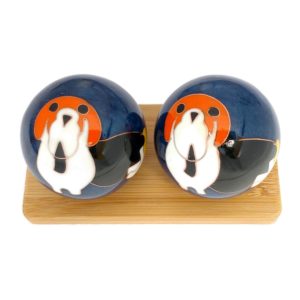 Quartz, also known as rock crystal, is a semi-precious gemstone that has phantoms and rainbow inclusions. Metaphysically, it is believed to have healing powers, increase Chi energy, remove negativity, promote harmony, bring clarity to the mind, boost the immune system, protect from radiation, and dispel static. It also is believed to be able to amplify the energy of any other crystals it is used with. Many use it during meditation and spiritual development, and it is believed to align all chakras and clear psychic debris from the aura.

These baoding balls are made into orgonite with a combination of quartz cast in resin with a copper yin yang spiral for channeling energy. A user of orgonite uses the object for its bio-energy, protective, and spiritual properties.

If you like to know more about orgonite, see our orgonite post about the benefits, uses, and properties.

It’s a nice edition to my set.

Having used these for only a week, I can still say that they have helped the arthritis in my hand.